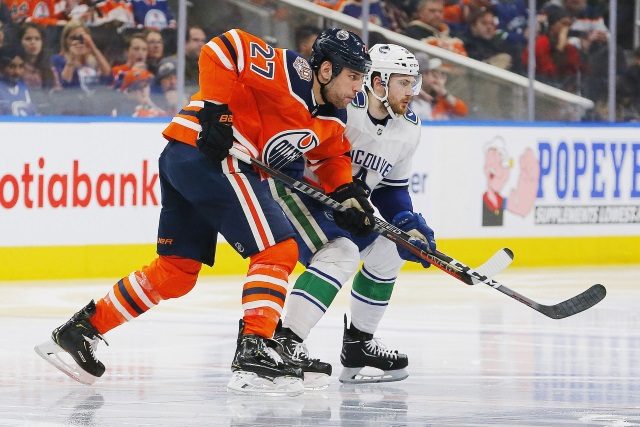 TSN Radio Vancouver: Jason Gregor: “I heard from a really good source that Jim Benning and his staff did sit down and discuss a Loui Eriksson for Milan Lucic trade. I see it from both sides. Here’s our bad guy for your guy who’s underachieved. I was told it happened in April, May, this offseason.”

TSN Radio Vancouver: Bob McKenzie on TSN 1040 radio: “When I first heard the Lucic for Eriksson talk, I initially thought “oh that’s creative, fans and media thinking about how to get rid of a problem”. Like a fantasy thing you sometimes talk about. But do I think it’s within the realm of possibility?”

TSN Radio Vancouver: McKenzie continued: “As of recently, there were no conversations between the teams on the subject matter. But that’s not to say there won’t be, particularly as we get closer to the draft. I would think you’re dealing with close to an untenable situation on both sides.”

TSN Radio Vancouver: McKenzie continued: “But as of right now, no tangible discussions. But I think it’s one where it’s worth keeping an eye on, as it might turn out to be something that has some legs.”

Senators looking long-term with a couple of defensemen

The Senators have spoken with defenseman Thomas Chabot about a potential long-term extension. He’s eligible to sign one after July 1st.

The Sens have also spoken with restricted free agent defenseman Cody Ceci about a long-term deal. If they can’t work out a deal it wouldn’t be a surprise if he’s traded. They are expected to be able to reach a deal.

It’s looking like the Senators will trade to trade defenseman Ben Harpur by the draft.

They need to decide if they are going to re-sign RFA Anthony Duclair. UFA Brian Gibbons could return but likely not for Magnus Paajarvi and Oscar Lindberg.

Canucks Acquire Beauvillier & Raty From Islanders For Horvat
Red Wings Have Hidden Gem Trade Deadline Target from Coyotes
When the Penguins have an emergency, they call on someone from N.S. It’s not who you think
Connor McDavid continuing to raise the bar: ‘We need to talk about it more’
Today in Hockey History: Jan. 28