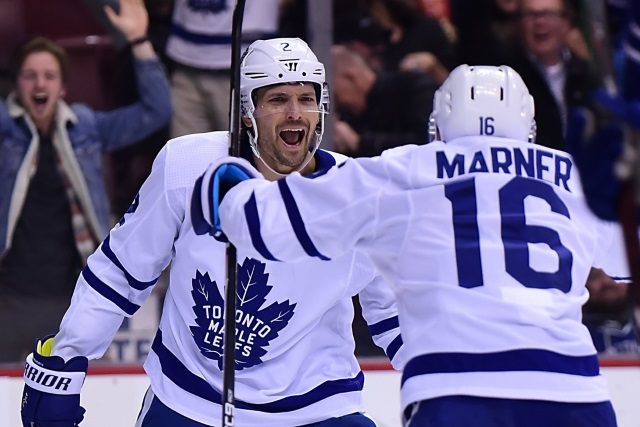 Leafs could use some help on the PK

Luke Fox of Sportsnet: The Toronto Maple Leafs could stand to improve their penalty kill. Two of their top four most used penalty killers could be on their way out of town. Defenseman Ron Hainsey is a UFA and forward Connor Brown is in the rumor mill.

Forward Zach Hyman will miss the start of the season after having ACL surgery.

The Leafs have cap issues, so they can’t afford to overpay a free agent.

They may have to go the trade route and they could look at defensemen Jacob Trouba, Colin Miller, Chris Tanev, Brett Pesce,  or Radko Gudas.

If looking at the free agent market they could consider re-signing Ron Hainsey at a reduced rate. Other options could include Anton Stralman, Patrik Nemeth, Ben Lovejoy, Jordie Benn, or Ben Chiarot.

Up front Detroit Red Wings center Luke Glendening has been tied to the Leafs.

McKenzie on the Maple Leafs and Marner

“The vibe from the Marner camp is that we’re in no rush. If we need to go to the free agent period and do some shopping around, great. If we can get an offer sheet, so much the better. We’ll leverage whatever things are in our favour and try to maximize our return and do a good deal. But if you’re the Leafs, you’ve got to try to put everybody on the clock and say, “Come with your level best offer realistic of what you want to pay Mitch Marner.””

McKenzie continues that the Maple Leafs need to find the number and term that they can afford and present it to Marner. If Marner says no, then they need to consider their options. If he says yes, then you go from there.

“These things tend to get drawn out a little bit, but in the Leafs’ case, anything they can do to expedite it and find out where things are at before the draft… Maybe they are going to have to go into the draft and talk to people about the unpalatable thing of maybe having to consider their options on trading Marner if they know Marner is not prepared to sign for what they’re going to give him.”