The love of hockey isn’t something inherent or happened upon for most people. Like many other sports, players spawn from those who played. Thanks to players, raising their families rinkside, many children grow to love the game and end up playing it. The sacrifice is great. The community and family found within the walls of the rink, however, makes it easier to bear and also breeds a deeper appreciation for the sport.

Familiar names from days past are now beginning to reappear, as sons and brothers follow in their fathers’ footsteps. The Detroit Red Wings have a few iconic families whose love of hockey has trickled down to the next generation. 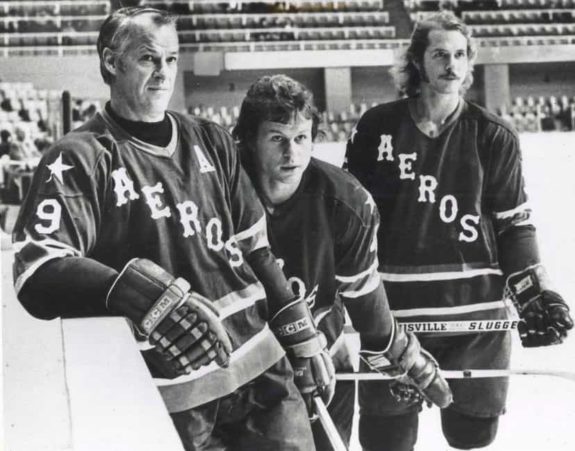 In the Beginning: The Howe Legacy

The most recognizable hockey family were, of course, the Howes. Gordie Howe led a professional legacy that few will ever come close to replicating. His intense work ethic and devotion to the game was embraced by his sons. Mark, Marty, and Murray all grew up under the influence of one of the greatest names in hockey. To them, he was dad. Their hero, leader, and teacher on and off the ice. All three boys played hockey and lead lives much like their father’s in one way or the other. Marty spent 22 seasons in various leagues, including 197 NHL games. Later, Marty went on to coach, finishing his hockey career in 2006 as the assistant coach with the AHL’s Chicago Wolves.

Mark marched to his father’s beat much more closely. Drafted in 1974, Mark spent a good deal of time in the minors before finally hitting NHL ice in 1979-80. Mark put the finishing touches on his career with Detroit spending 1992-95 with the Wings. He played 979 career NHL games.

Howe’s son Murray took a different path than his siblings, but still found himself immersed in hockey. Playing throughout his younger years, Murray was eventually cut by the Michigan University team. When approaching his father about being cut, Murray stated that “Dad was relieved. The only thing that was important to my parents was that the Howe kids were happy. Mr. Hockey could sense that I was losing my love for the game.” Gordie fully supported his son’s ambitions for the medical field which lead Murray to a successful career in sports medicine. Like the other Howe siblings, Murray has the utmost respect for his late father and carried on his legacy by writing Nine Lessons I Learned From My Father, a tribute to the gentle giant and beloved father he was.

The Red Wings Hall of Famer produced hockey-heirs of his own, now playing in Sweden. Having three sons of his own, he encouraged them to play, but have fun with it. After his tenure with Detroit came to an end, the calm and stately defenseman returned to his homeland with his family.

Adam and Kevin Lidstrom grew up with little pressure. Taking time to know his children, Adam had stated that father Nicklas,”…doesn’t put a lot of pressure on me. I always come to him and ask him a lot of advice. He actually gives me a lot of advice. Some nights we’ll sit up and talk about hockey for a couple hours.” Maintaining the same disposition on and off the ice, Lidstrom did not force his boys into the game, rather, let it develop on its own. Having found the love and the talent individually, he supports his boys the way he supported his team once upon a time; calmly.

Adam, 23, currently plays for Enkopings SK. Kevin, 25, finished out the 2017-18 season with SK Lejon and will be joining younger brother Adam with Enkopings SK for the 2019-20 season. Samuel, the youngest of the Lidstrom sons, 19, has also joined his brothers on the ice playing for Vasteras IK J20 throughout the 2018-19 season.

The Next Generation: Larkin and Bertuzzi

Following the leadership of the great ones, the younger generation is beginning to transform hockey. Kevin Larkin, the father of Dylan Larkin, only went as far as youth hockey. Never seeing an NHL contract for himself, Mr. Larkin pursued soccer instead. The love of the game lived on, however, and eventually inspired his sons Dylan and Colin to find their hockey edge. Both boys, Dylan currently playing with the Red Wings, and Colin with the AHL Bakersfield Condors, are forging their own path.

The Larkin’s love of the game doesn’t stop with their contracts, however. Following the supportive example of their mother and father, both Larkin sons and their cousins Adam and Ryan, hope to help lead the new generation. Each year, the Larkin family hosts the Larkin Hockey School, a camp designed for youngsters who are passionately pursuing the game.“A lot of us that are doing this camp grew up right in this rink and it is cool to come back and give back to these kids that are hopefully going to follow in our footsteps,” Dylan told Detroit Red Wings writer Dana Wakiji.

Another well-known hockey family is the Bertuzzis. Tyler Bertuzzi’s father, Adrian Gedye, did not play in the NHL, but he remained actively involved in the hockey community. Gedye is the owner of the WJHL Rayside Balfour Canadians as well as a talent agent. Along with a father whose family was founded on hockey, Tyler also had the benefit of his uncle Todd Bertuzzi’s career. After a highly successful AHL career, Tyler catapulted himself to a permanent place on the Red Wings roster. He finished his first full NHL season with an incredible 47 points in 73 games.

Tyler and his siblings have been surrounded by hockey for their entire lives and have grown to love the sport. Along with his siblings, the Bertuzzi cousins, Tag and Jaden, also play. Tag is currently listed as 210th overall in the upcoming 2019 NHL Entry Draft.

The Fathers of Hockey

With any career path, family support is important. For these Red Wing families, it was everything. The love of the game is bred in the home. The leadership of the fathers, uncles, and grandfathers will always be a part of the past and present generations of player. From early morning practices to weeks away from home, the fathers of hockey sacrificed much. In their sacrifices, however, the passion was born. From their leadership, a younger generation will carry on their legacies while forging their own.

To the hockey dads, grandfathers and mentors, happy Father’s Day. The hockey world thanks you for your encouragement and dedication to the game and your families.