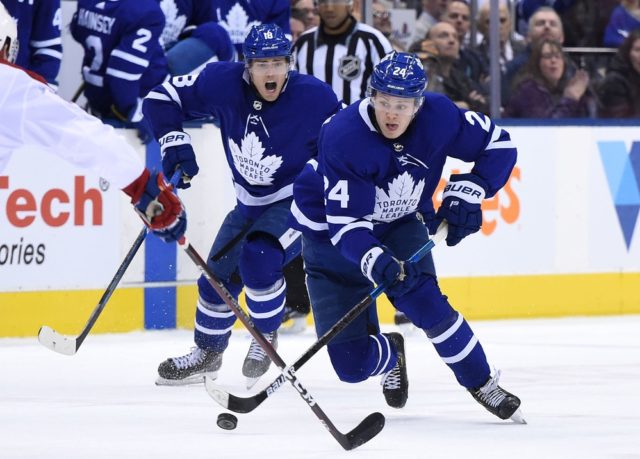 A collection of quick twitter notes as the 2019 NHL draft gets underway.

Chris Johnston: “It sounds like Kasperi Kapanen and the #leafs are getting closer on an extension.”

Pierre LeBrun: “There’s been much progress in talks between William Karlsson’s camp and the Golden Knights and barring a last-minute hiccup I think we’ll see a long-term deal wrapped up in the next week or two for the top-line forward”

Adrian Dater: “More buzz I’m hearing about Barrie and Canucks. Tanev name has bubbled up. More rumblings as I hear them.”

Ducks likely not interested in moving any of their top picks

Eric Stephens: “Been quiet around Ducks. Not likely 9, 29 or 39 will be in play for any immediate roster help. Maybe draft position movement but they typically stay at their spots and choose.”

Shawn Hutcheon: “Some close to the situation saying #NHLBruins are kicking tires on #mnwild Jason Zucker.”

Flames could move a defenseman by the start of free agency

Murray Pam: “#Flames D TJ Brodie may be on the move this weekend or prior to July 1.”

Canadiens should look at Brodie

Dan Robertson: “I’d have to think Calgary’s T.J. Brodie would be a good trade target for Bergevin. 29 year old LD, skates well, one year left on deal at $4.65M. Maybe Juulsen the other way?”