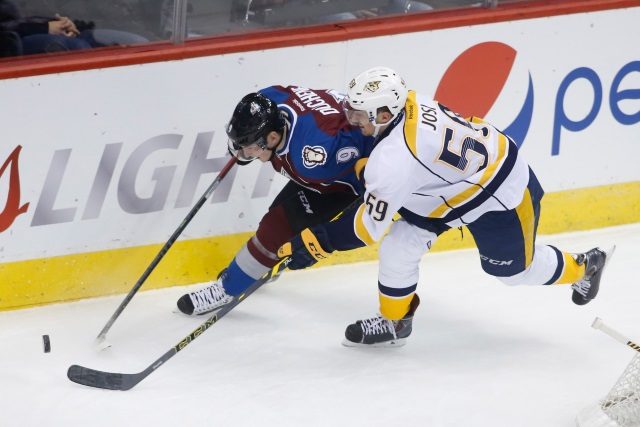 On the trading of Subban

Mike Morreale: Nashville Predators GM David Poile: “We had to make a business decision. With an aim at strengthening our forward corps this offseason, and the continued strength of our defensive group, we felt it was necessary to clear up salary cap space this way.”

Aaron Portzline: Using CapFriendly numbers, Duchene in Nashville. “There are no state/city income taxes in Tennessee, so Preds could sign Duchene to a deal worth $9M and he’d keep more income ($5,705,012) than he would at $10M from Columbus ($5,587,844).

David Pagnotta: Losing Subban’s cap hit allows them to better look at free agency as well fitting in Romon Josi’s contract extension which could be in the $9 to $10 million range.

UFAs likely not coming back

Pierre LeBrun: GM Poile said that Wayne Simmonds won’t be back and will be heading to free agency.

Paul Skrbina: Along with Wayne Simmonds, Poile said that free agents Zac Rinaldo and Cody McLeod won’t be back.

Poile didn’t sound convinced that they would be able to bring Boyle back. He’s already met with his agent.

Turris’ term may be more of the issue than money

Shawn Simpson: The five-year term remaining on Kyle Turris‘ deal is a bigger issue than the money. He’s a smaller player but has quietly played hard and hurt. A buyout could eventually be a possibility.

John Glennon of The Athletic: The Nashville Predators need to find more scoring help up front.

Trading P.K. Subban may not have been a popular move, but it moves out $9 million in cap space for future moves.

Kyle Turris is owed $30 million over the next five years, but there wouldn’t be a long list of teams interested, especially if paying full contract value.

With this added salary cap space, the Predators need to add score help up front.

Matt Duchene may not be the perfect fit, but he is the best center on the market, and it sounds like he’d be interested in living in Nashville. He’d likely get a seven-year contract around $8 to $9 million and will be a top priority for the Preds.