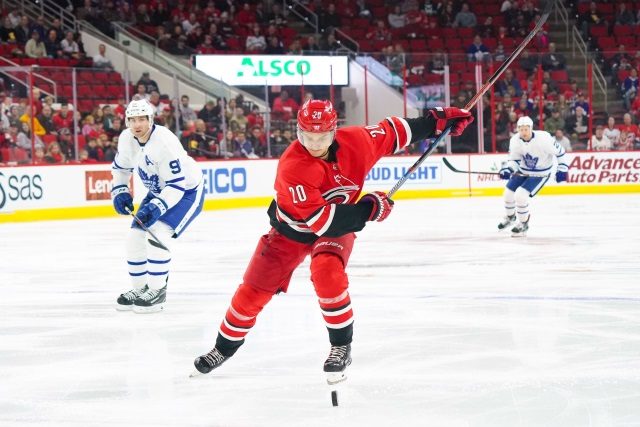 Ryan Kennedy: One high-profile agent: “You know no offer sheets are coming, right?”

@Account4hockey: Pierre LeBrun was on TSN 1050 and teams are telling agents that if there interest in sending an offer sheet to a restricted free agent is leaked, they will pull the offer.

Larry Brooks has said the New York Rangers won’t be offer sheet anyone, but Rick Capiniello has said the Rangers were looking at Brayden Point.

Pierre LeBrun: Teams were calling Carolina Hurricanes on Sebastian Aho’s camp yesterday. believes that he only wants to play in Carolina but teams are still going to call.

Frank Seravalli: It’s believed that Aho’s initial asking price was for five years at $9.5 million per.

Pierre LeBrun: Teams called on RFA Kyle Connor yesterday. He is intending to sign a deal with the Winnipeg Jets.

Darren Dreger: Interest in RFA Mitch Marner has been “brisk” now that teams can talk to RFAs.

Sources are saying that multiple teams have reached out to his camp.

Chris Johnston of Sportsnet: It’s not known if Mitch Marner will actually travel to visit cities that are interested in signing him to an offer sheet.

The Maple Leafs are waiting to see how the situation plays out.

“There’s not a real barometer, I don’t think,” Leafs GM Kyle Dubas said at the conclusion of Saturday’s draft in Vancouver. “It’s a little bit of a new world and we’ll see what happens.”

People are still skeptical if any of Marner, Brayden Point, Patrik Laine or Sebastian Aho would sign an offer sheet. If someone is going to it, this may be the year to do so.

If Marner (or someone) signs an offer sheet, their team has seven days to match. If Marner doesn’t get an offer sheet, the sides will continue to negotiate. A holdout wouldn’t be good for the Leafs as the pro-rated cap hits are higher and it would even harder to fit into their cap. October 1st may be their true deadline.

“You always hope you don’t go right down to the final hour,” Dubas said at the draft. “It seems to be a specialty of ours a little bit. We’ll try to avoid it this time.”