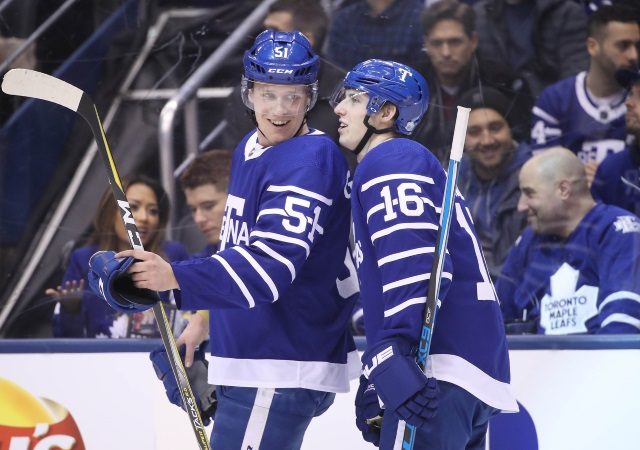 @Prospects_Watch: Darren Dreger said on TSN 1050 that he believes the New York Islanders are one of the teams interested in Mitch Marner.

Dreger adds that he doesn’t believe that the Islanders wants to “stick it” to the Maple Leafs, but Marner is just the type of player that they want to add.

Elliotte Friedman of Sportsnet: An agent said there are three things when it comes to offer sheets.

The New York Islanders would be one team, and some think the Buffalo Sabres might consider.

Leafs were one of three in on Subban

Four teams that are high on Jake Gardiner‘s list are…

Steve Simmons: The Florida Panthers, Los Angeles Kings, Minnesota Wild and Toronto Maple Leafs are high on Jake Gardiner’s list. As of Monday, there was no word on who he’ll be meeting with.

@Prospects_Watch: Bob McKenzie on TSN 690 said that Gardiner is looking for a long-term deal at $7 million per season.

How could the Maple Leafs improve their blue line?

Anton Stralman would be a guy that would fit very nicely in the profile of the Leafs defense, but the reality is he is a UFA who is going to get way more money and way more term and way more security in terms of no-move clauses than the Leafs would be prepared to give him.

I don’t think there is a solution on the free agent market, so it’s going to have to be by trade, and it’s going to be chipping away at that trying to find a way to get it all done.”