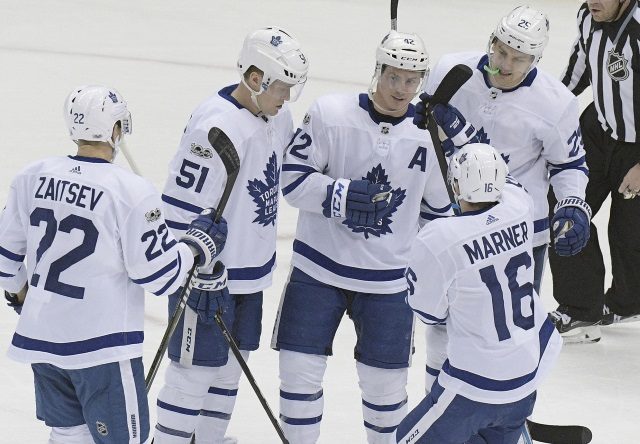 No trade offers for Marner at the draft .. Price too high for Stralman for the Leafs

James: Pierre LeBrun said on TSN 1050 that the Toronto Maple Leafs didn’t receive any trade offers for Mitch Marner at the draft.

Teams and agents have both said that the Maple Leafs are trying to seriously remake their blue line. doesn’t think they were really close to acquiring P.K. Subban.

The Maple Leafs called Anton Stralman‘s camp but the cost was too high.

Could the Leafs offer Marner a two-year bridge deal?

@Prospects_Watch: Elliotte Friedman on the Maple Leafs and Mitch Marner: “I think the Leafs are going to offer him 2×8, I think they’re going to say, we all believe the cap is going up in 2 years, why don’t you sign then when we have more room and the maximum is higher?”

Lots of interest in Gardiner

@Prospects_Watch: Chris Johnston on Sportsnet 590 on Jake Gardiner: “There is tons of interest in Jake Gardiner, if the Leafs had their way he wouldn’t be anywhere near free agency right now…He’s going to make a lot of money July 1”

On the New Jersey Devils and offer sheets

Neal McHale: Bob McKenzie on TSN 1050 on the New Jersey Devils, who have tons of salary cap space, and offer sheets:

“They just traded for PK Subban’s $9M per year, they want to sign Taylor Hall, they’ve had 2 first overall picks in the last three years and they’ve had other high picks … They’ve been loading up on draft picks for some time and have a core of good young players in their lineup already … If you were connecting all the dots: they have cap space, they’ve got a bunch of young kids and high-end first round picks. If they needed to give up 4 first round picks, they’re perfectly situated to do it.”