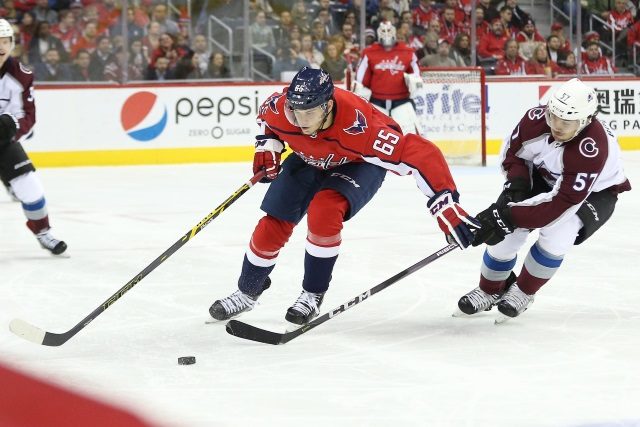 The Washington Capitals have traded RFA forward Andre Burakovsky to the Colorado Avalanche for Group 6 UFA forward Scott Kosmachuk, a 2020 2nd round pick and a 2020 3rd round pick that previously belonged the Arizona Coyotes.

The 24-year old Burakovsky was drafted 23rd overall in the 1st round of the 2013 NHL draft by the Washington Capitals.

The 25-year old Kosmachuk was drafted 70th overall in the 3rd round of the 2012 draft by the Winnipeg Jets.

David Pagnotta: Colorado Avalanche GM Joe Sakic: “We are excited to be adding a big, fast, skilled winger like Andre. He already has a lot of NHL experience at a young age. At just 24 he is entering the prime years of his career and we feel with an added role, he will be a great addition to our team.”

Brian McNally: “#Caps are well aware that an Andre Burakovsky trade could backfire. He has the talent to be a 20+ goal scorer. They weren’t willing to wait for it to happen here. They’ve made their judgement on him. Salary-cap considerations, too.”

Stephen Whyno: “Caps got a good return, Avs began to constructively use their heaping pile of cap space and take a chance on a potential 20-goal scorer. Colorado needs more offense from its forward depth and Andre Burakovsky is a good step.”

Jason Gregor: “Smart trade by Avs. Burakovsky can fly and is skilled enough to be a real threat in top six. AND Inky give up a 2nd and 3rd rounder. Curious what term and $$ he gets on new deal? Two years until he is UFA.”

Todd Cordell: “I, for one, am not surprised it is the Avalanche taking a gamble on Burakovsky. His rate stats are solid — suggest he can do more in a bigger role. Smart add for an Avs team that needs more scoring and depth on the wing.”

AJ Haefele: “This is why Colorado has long been linked to Burakovsky. They like taking chances on guys who need bigger roles. This definitely a guy they will want to give a look at in their top six.”

Chris Peters: “Like this fit for the Avs. Burakovsky could get an elevated role, brings skill to the lineup. Low-risk gamble to see what more they can get out of him in a new setting.”

Isabelle Khurshudyan: “That’s better return than I thought the Caps would get. And they can now sign a middle-six forward in free agency next week.”

Isabelle Khurshudyan: “This could be a really good thing for Burakovsky. He’s someone who will probably benefit from a change of scenery.”

Jonathan Willis: “I think the Capitals are helped immensely here by the fact that they aren’t in any particular cap trouble this summer. I’d imagine if WSH adds money at some point this offseason it will mostly be players on expiring deals given that Backstrom and Holtby are UFAs next summer.”

Burakovsky has fallen off a bit in recent seasons, but looks like an average player that’s young enough to bounce back in a larger role, one he arguably deserves. pic.twitter.com/ulD5qJkyQ3

Additional changes made to All-Star rosters
Hall of Famer Hull, the Golden Jet, dies at 84
Capitals sign Dylan Strome to $25 million, 5-year extension
Senators Need to Build Momentum in 2nd Half & Not Be Big Sellers
Canucks Acquire Beauvillier & Raty From Islanders For Horvat