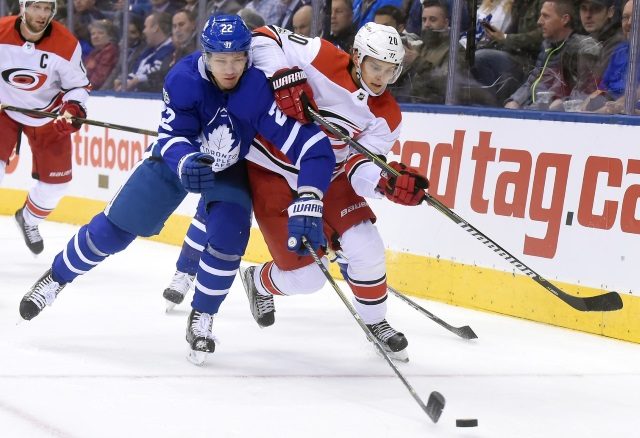 The opening day of the 2019 NHL free-agent period usually results in a frenzy of contract signings. Within hours following the 12:01 ET start time on July 1, the best available talent gets inked to expensive new deals.

This year was no different, but there was additional spice to the day. The revealing of several notable deals well before the official opening of the market, a rare offer sheet, and two multi-player trades by the Toronto Maple Leafs made things more interesting compared to recent years.

The buildup to July 1 saw the usual speculation over potential destinations for the top free-agent stars. But by the evening of June 30, the details of new contracts for notable players such as Matt Duchene, Sergei Bobrovsky, and Joe Pavelski were already disclosed to the media.

Those leaks carried over into the morning of July 1. By noon ET, the destinations for Tyler Myers, Jason Spezza, and Joonas Donskoi were also revealed.

That’s the first time the contract details of so many UFAs were made public before the start of the free-agent period. Those leaks may have come from the players or their agents, or maybe a general manager or two.

Regardless of the source, the NHL might not take kindly to these shenanigans. It’ll be interesting to see if the league takes action to prevent this from happening again.

Those leaks could’ve dampened some of the day’s excitement. However, the Montreal Canadiens signing Carolina Hurricanes center Sebastian Aho to an offer sheet had the hockey world buzzing.

The Canadiens’ move marked the first time in over six years a team signed a rival club’s restricted free agent to an offer sheet. While the deal itself – five-year, $42.27 million, $8.454-million annual average value – wasn’t mindblowing, the devil was in the details. In this case, the signing bonuses.

Aho’s actual salary would be $750K per season, with the rest paid out in annual signing bonuses. As per TSN’s Pierre LeBrun:

The Canadiens were gambling the small-market Hurricanes would balk at those bonuses. Canadiens general manager Marc Bergevin and Aho’s agent, Garry Johanssen, stirred the pot by claiming the 21-year-old center wanted to play for Montreal.

Those efforts to drive a wedge between Aho and the Hurricanes front office failed. Within 24 hours, team owner Tom Dundon stated the club’s intent to match the offer. General manager Don Waddell said they would do so within the time frame allotted by the CBA. He could take the entire seven-day decision period to do so just to stick it to the Habs.

Bergevin caught flak from fans and pundits for what was considered a weak attempt at an offer sheet. Dundon insinuated the Habs GM was manipulated by Johansson.

However, the Canadiens’ failed bid cost them nothing. They still have over $11 million in salary cap space and 12 picks in the 2020 draft. Those dollars and picks could prove useful if Bergevin turns to the trade or free-agent markets.

The Hurricanes keep Aho but for three years less than their rumored eight-year pitch. The youngster’s new contract ensures he’ll be eligible for unrestricted free agent status at age 26.

The Leafs, meanwhile, generated excitement among their rabid fan base with two multi-players trades.

The first saw defenseman Nikita Zaitsev and forwards Connor Brown and Michael Carcone shipped to the Ottawa Senators for blueliners Cody Ceci and Ben Harpur, center Aaron Luchuk, and a 2020 third-round pick.  That deal was worked out days before but couldn’t be actioned until the Leafs paid Zaitsev his $3 million signing bonus on July 1.

Later in the day, they sent center Nazem Kadri, defenseman Calle Rosen, and a 2020 third rounder to the Colorado Avalanche for blueliner Tyson Barrie, forward Alexander Kerfoot, and a sixth-round 2020 draft pick.

With both deals, the Leafs shored up their right-side blueline depth. Barrie is a skilled, mobile top-pairing defenseman. Ceci, meanwhile, had his struggles in Ottawa but could benefit playing with a more stable organization in Toronto.

Those moves left the Leafs with over $11 million in salary-cap space for 2019-20. Over half of that will be swallowed up in new contracts for Ceci and Kerfoot. With restricted free agent Mitch Marner still to be re-signed, Leafs GM Kyle Dubas must remain creative to find sufficient cap room.

Don’t underestimate Dubas’ ability to juggle his salary cap without weakening his roster. He managed to shed Zaitsev’s troublesome contract. He also cut Patrick Marleau‘s $6.25-million cap hit from the Leafs books last month by shipping him to the Hurricanes.