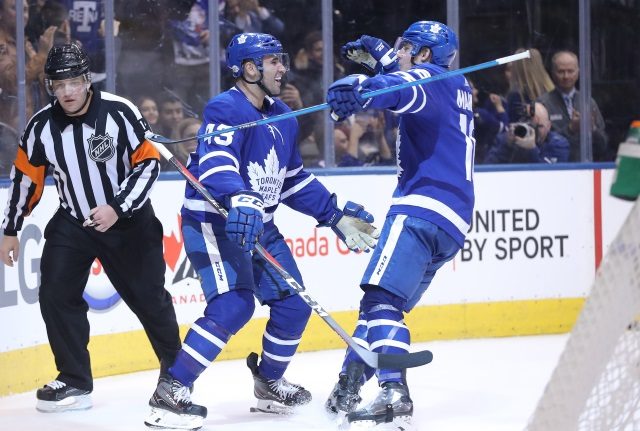 Dubas on Marner and offer sheet after Aho signed one

“I know I set this as a priority and looked at today as sort of the day we wanted it done. We obviously don’t have that yet, but we’ll keep working, trying to find a way to come to a good conclusion with Darren and Mitch and roll from there.”

“We’ve got lots of cap space, we’ve got different options,” Dubas confirmed. …really worked steadfastly on making sure we’re protected to evaluate every single thing that comes in here. I feel we’re well set up for whatever comes our way, but our primary ambition is to try and find an agreement with Mitch.”

Pierre LeBrun: Over the past week there were two teams that were showing interest on Nazem Kadri‘s 10-team no-trade list. Kadri didn’t want to waive it for those teams. The Colorado Avalanche weren’t on his list.

Ryan Pike: It’s believed that the Calgary Flames were one of the teams that were on his no-trade list.

Chris Johnston of Sportsnet: The Toronto Maple Leafs recent trades gives them a little more wiggle room to re-sign Mitch Marner and helped fill some holes on their blue line.

The Leafs are not better balanced on the left – right sides and may be deep enough to allow Rasmus Sandin and Timoth Liljegren another year in the AHL.

Sources said the Maple Leafs had been working on three-team trade involving Nazem Kadri over the weekend but the one team acquiring Kadri was on his 10-team no-trade list.

Ranking the NHL’s best current rivalries: Where does Lightning-Panthers fit in?
Avs’ MacKinnon on G2 loss: ‘We were really bad’
Hockey Night in Canada: Blues vs. Avalanche, Game 2
Damien Cox: Joel Quenneville could help the Leafs, but how long does disgrace last in hockey?
Oilers’ Connor McDavid Hits a New Level of Greatness in 2022 Playoffs