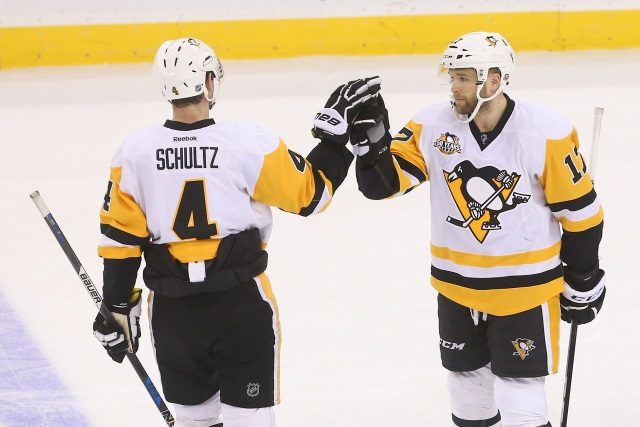 Josh Yohe of The Athletic: Updating the Pittsburgh Penguins untouchable to most likely to be traded.

The What’s The Point Division?

The Sure, It Could Happen Division

Nick Bjugstad – Carries a $4 million salary cap hit and has had his name in the rumor mill. Didn’t play bad when acquired from the Panthers, but didn’t lock down the No. 3 center spot.

Bryan Rust – It would have to be a really good offer to move him as he fits well on their top line.

Tristan Jarry – There is a good chance that he gets traded the offseason. He could be a good sweetener on a deal trying to move out some salary.

Some trade candidates and potential targets

Dan Kingerski of Pittsburgh Hockey Now: The Pittsburgh Penguins don’t have much salary cap space a have a few RFAs to re-sign.

The Penguins will likely have to go the trade route to improve their roster.

Trading defenseman Jack Johnson for a pick won’t be an easy task. Other trade candidates could include Bryan Rust, Tristan Jarry and Justin Schultz.

Three potential targets for the Penguins could be …. (speculation and not from any sources)

Travis Hamonic – right-handed defenseman with a $3.85 million cap hit. Might take Schultz to acquire him, or possibly Erik Gudbranson and a winger.

Jesse Puljujarvi – right wing RFA. Penguins have talked to the Edmonton Oilers but the asking price was believed to be Bryan Rust. Moving Rust’s close to $4 million cap hit would give them some much needed cap room.

Rasmus Ristolainen – right-handed defenseman with a $5.4 million salary cap hit. His struggles last year and their acquisitions of Colin Miller and Brandon Montour could push him to their third-pairing.

Blazers put an end to surprising Giants’ WHL playoff run
3 Reasons the Flames Eliminated the Stars
Oilers blank Kings to prevail in decisive Game 7, advance to 2nd round
Maple Leafs Getting Bulletin Board Material From Jon Cooper
Today in Hockey History: May 15