Ever since Maurice “The Rocket” Richard became the first to do so in 1944-45, scoring 50 goals in one season has been the pinnacle plateau for NHL goal scorers. The magic 50-number has distinguished the true “snipers” of the league. While Wayne Gretzky once scored 50 in only 39 games – an NHL record – many Hockey Hall of Famers never hit the mark even once. Since their inaugural NHL season in 1967-68, the St. Louis Blues have had only three players reach 50 goals in a single season. To put things into perspective, the New York Rangers have existed for 41 more years than St. Louis, and even they have only had three players accomplish the feat.

To further emphasize the rarity of the 50-goal achievement, it took 14 seasons before any Blues player completed the task. From there, the three players who did so came in relatively short order. However, no St. Louis player has reached 50 again since the 1993-94 season. Given the decrease in goals being scored in the NHL today compared to earlier decades, it may be many more years until a fourth member joins the Blues “50-Goal Club”. 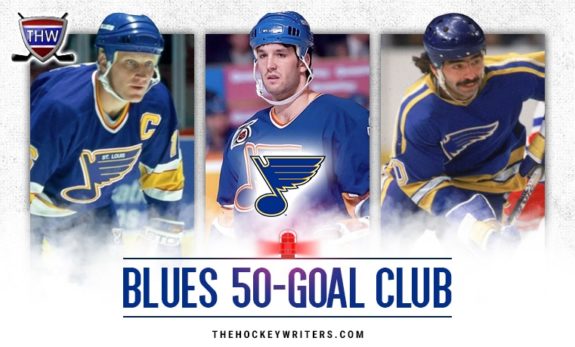 We take a look now at the trio of Blues scorers who were able to reach plateau. Two of them did it more than once. One completely blew the mark right out of the water, and on more than one occasion.

Wayne Babych was the third overall selection of the 1978 NHL Amateur Draft. The Blues knew what they were doing when they selected him, as he was fresh off of two straight 50-goal seasons while playing junior in the WCHL for the Portland Winterhawks. Babych immediately made the jump to the NHL for the 1978-79 season, and would score 27 and 26 goals in his first two campaigns.

When the 1980-81 season came about, Babych simply exploded in the goal column. Playing in 78 of St. Louis’ 80 games that season, he ratcheted-up 54 goals while clicking exponentially with Blues’ great Bernie Federko. As Babych worked his way to 50, Federko achieved the first 100-point season of his career. The symbiotic relationship on the ice between the two marquee Blues led to Federko reaching a career-high in assists that season with 73 helpers (he would equal that mark again in 1984-85). Surprisingly, Babych only scored one hat-trick while assembling his 54 tallies. 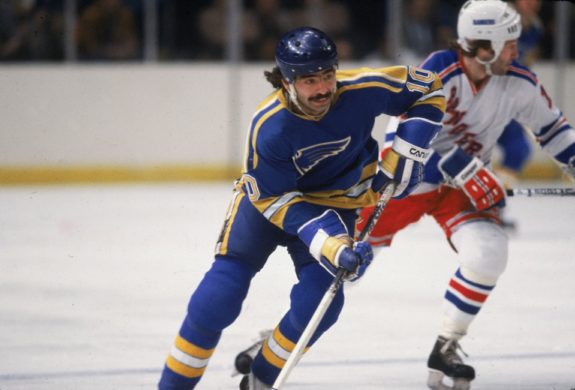 Babych and Federko were so good together that St. Louis decisively won the Smythe Division in 1980-81 with a superb record of 45-18-17 – good enough for 107 points. Granted, Babych and Federko did not do that all alone. The great Red Berenson coached from the helm, while Mike Liut manned the St. Louis net. Babych and Federko were two of 10 Blues to score at least 20 goals that season. Despite the solid performances by so many on the team, the Blues would be eliminated in the second-round of the playoffs by the New York Rangers.

Babych’s goal totals would never reach close to 50 again. In fact, he would only hit 20 goals one more time during the remaining six seasons of his career. The Blues would ultimately part ways with him after the 1983-84 season, and Babych would finish out his time in the NHL with stops in Pittsburgh, Quebec, and Hartford. It would take until 1989-90 for another St. Louis player to score 50 goals again. 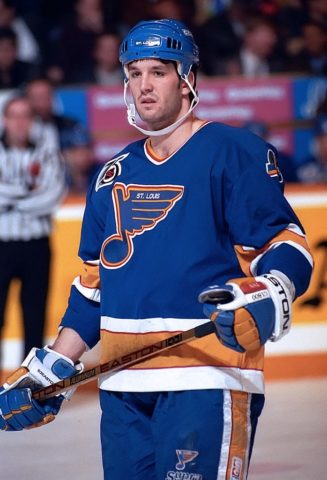 Hockey Hall of Famer Brendan Shanahan had back-to-back 50-goal seasons during his time with the Blues. (Photo by Graig Abel Collection/Getty Images)

Before arriving in St. Louis, Brendan Shanahan’s highest NHL goal total was 30. Drafted second overall in 1987 by the New Jersey Devils, his first few seasons were comprised of more penalty minutes than goals. Shanahan would score just seven times in his rookie season, but would follow that up with 22 goals as a sophomore player. From his second season onward, he would score at least 20 goals for 18 consecutive seasons – a production that ultimately generated 656 goals by the end of his career.

Shanahan arguably did his best goal scoring in St. Louis. On July 25, 1991 – after four seasons with the Devils – he signed as a free agent with the Blues. In his first season with his new team, he scored 33 times. With the exception of the lockout shortened 1994-95 season, Shanahan’s goal totals went up in each season for St. Louis.

Shanahan would follow that performance up with 52 goals the very next season. He would score his 50th goal as the third goal of a hat-trick when the Blues played in Dallas on Apr. 12, 1994. Even though Shanahan scored three goals – all against Stars goalie Andy Moog – the Blues still lost the game 9-5. Shanahan would add two more goals just for measure two days later when the Blues played Winnipeg. Tacking on 50 assists as well that season, this was the only time in his 21 NHL seasons in which he surpassed 100-points.

The Blues traded Shanahan to the Hartford Whalers on Jul. 27, 1995 in exchange for Chris Pronger. His two 50-goal seasons for the Blues would be the only times that he reached the mark in his entire career.

Brett Hull may very well be the greatest natural goal scorer in hockey history. If he isn’t, then he is certainly the premier goal scorer in St. Louis Blues history. 527 times he found the back of the net while playing in a Blues uniform. He scored 741 times in total by the end of his career. It was with St. Louis though that “The Golden Brett” surpassed the 50-goal mark on five consecutive occasions. He did not just surpass it, however – he obliterated it!

Hull was most productive when he was flanking Hall of Famer center Adam Oates – one of the best passers to ever put on a pair of skates. In their first season together – 1989-90 – Hull scored 72 times. He recorded his 50th on Feb. 6, 1990 against the Toronto Maple Leafs and goaltender Jeff Reese. It took Hull just 54 games to score 50. 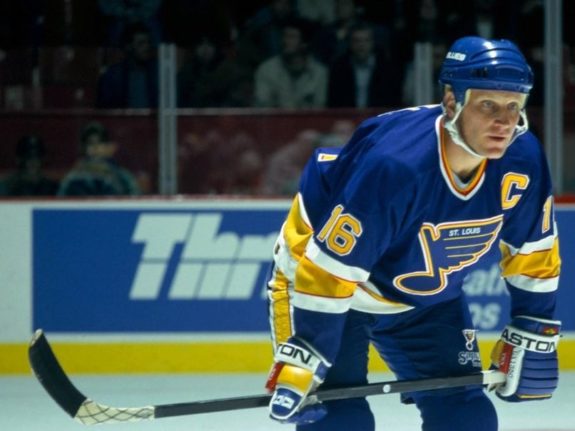 Brett Hull’s 86 goals during the 1990-91 season is the second-highest total in NHL history. (Photo by Denis Brodeur/NHLI via Getty Images)

As if 72 goals were not enough, Hull possessed an even hotter stick in 1990-91. Playing in 78 games for the Blues, he scored an astounding 86 goals that season – the second most in NHL history behind Gretzky’s 92 in 1981-82. The vast majority of those goals were converted from Oates’ passes, who finished the season with 90 helpers himself. Hull’s 50th came during a 9-4 Blues victory in Detroit against the Red Wings on Jan. 25, 1991. He first scored his 49th against Tim Cheveldae, and then his 50th on David Gagnon who only played two games in his NHL career. This time Hull only needed 49 games to get the job done.

Following his 86-goal campaign, Hull would again get to 70 – this time exactly on the nose – for 1991-92. The numbers themselves continued to look astronomical as he scored 70 times within 73 games. This would be the final time that Hull and Oates performed together, as the centerman was traded to the Boston Bruins in February of this same season. While Hull continued to be a goal-scoring machine throughout the rest of his career, he never reached totals as high as when he played alongside Oates.

The final two times in Brett Hull’s career that he scored 50 goals matched those of Shanahan’s two 50-goal campaigns. It is a rare occurrence for an NHL team to have two 50-goal scorers on their roster at the same time. Rare as it may be, Hull scored 54 goals in 1992-93 and 57 goals in 1993-94.

Who Will Be the Next Blue to Score 50?

It is difficult to say with certainty when and if another player for the Blues will score 50 goals in a single season. Since the 1993-94 season when it last happened, a lot of players have gotten over 40. Hull did it in 1995-96 and 1996-97. Scott Young, Brad Boyes, and Vladimir Tarasenko are the only other players to reach 40 or more, and each has only done it once. 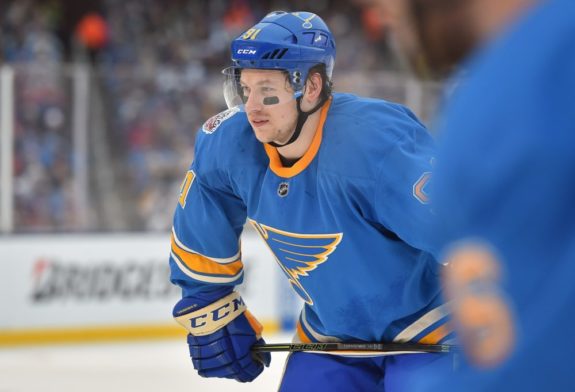 Could Vladimir Tarasenko become the next Blues player to score 50 goals in a season? (Jasen Vinlove-USA TODAY Sports)

If any player is to reach 50 sometime soon, the likeliest would be Tarasenko. With seasons of 37, 39, and 40 being his highest totals during his time in St. Louis, he could conceivably make the jump to 50 but would need an extra special performance in order to do so. Regardless, Tarasenko is currently the best option for hitting the mark.

The likelihood, however, is that Babych, Shanahan and Hull will remain the lone members of the exclusive Blues 50-Goal Club for many more years to come.