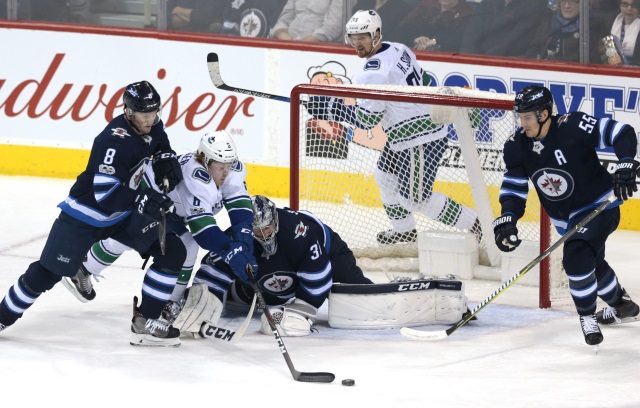 With the frenzy from the opening day of the free-agent market faded, a handful of clubs remain uncomfortably close to the cap. Some could be forced to free up more dollars via the trade market.

Here’s a look at the Western Conference teams that could shed salary, and the players who could become cap casualties.

Cap Friendly indicates the Golden Knights have over $84.1 million invested in 20 players, putting them over the cap by $2.6 million. Placing permanently-sidelined winger David Clarkson ($5.25 million) on long-term injury reserve provides some relief but no room to re-sign restricted free agents Nikita Gusev and Malcolm Subban.

On Tuesday, The Athletic’s Jesse Granger reported the Golden Knights were shopping Gusev’s rights. The two sides are reportedly $2 million per season apart. If they still feel he’s worth signing, the Las Vegas Sun‘s Justin Emerson speculated Cody Eakin, Ryan Reaves or Nick Holden could be moved instead.

With over $75.1 million committed to 19 players, the Sharks have over $6.3 million in cap room. Restricted free agent forwards Kevin Labanc and Dylan Gambrell lack arbitration rights and could be signed to cost-effective bridge contract. However, unrestricted free agent Joe Thornton could return for one more season. There’s also talk former Shark Patrick Marleau hopes to come back for a final hurrah.

If the Sharks intend to sign all four, they’ll have to trade somebody to free up the cap room. NBC Sports’ Chelena Goldman suggested forward Melker Karlsson, backup goalie Aaron Dell, or defenseman Brenden Dillon could become trade options. Goldman thinks Karlsson may be the most likely to go.

The lower-than-projected cap and the salary-cap recapture penalty from Roberto Luongo’s retirement bit deep into the Canucks’ payroll. They have over $75.9 million tied up in 27 players. That leaves just over $5.5 million to re-sign four RFAs, including Brock Boeser and Nikolay Goldobin. Boeser alone eats up all of that cap space and more.

Ben Kuzma of the Vancouver Sun reported Canucks GM Jim Benning tried to trade expensive veteran winger Loui Eriksson but found no takers. He also speculated Benning could attempt to move center Brandon Sutter. That also won’t be easy, as the injury-plagued Sutter carries an annual average value of over $4.375 million through 2020-21.

The Flames have over $72 million invested in 21 players. That leaves over $9.4 million for RFAs Matthew Tkachuk, Sam Bennett, David Rittich, and Andrew Mangiapane. Tkachuk’s new contract will likely eat up the bulk of that.

Darren Haynes of The Athletic speculates re-signing all their RFAs could push the Flames’ cap payroll to over $87 million. His suggested cost-cutting options include trading one of their veterans. Defensemen T.J. Brodie and Travis Hamonic, as well as winger Michael Frolik, have surfaced in trade speculation.

At first glance, the Jets are in good shape cap-wise. They have over $58 million tied up in 15 players, with around $22 million in cap room. However, they have five RFAs to re-sign, including forwards Patrik Laine and Kyle Connor. New contracts for those two could reach a combined $17 million, leaving little space for Andrew Copp and Neal Pionk.

The Jets could wait until they get most of those RFA signings sorted out before determining if a cost-cutting move is necessary. Forwards Nikolaj Ehlers ($6 million annual average value) and  Mathieu Perreault ($4.125 million) have come up in media trade speculation.