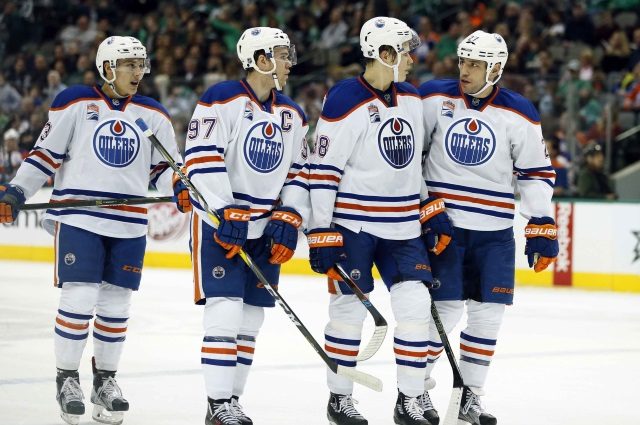 Jason Gregor of OilersNation: The Edmonton Oilers would like to add a scoring winger but they don’t have a lot of salary cap space to work with.

GM Ken Holland tried to sign a few players at the start of free agency but was outbid. Wayne Simmonds got $1.5 million more than what the Oilers offered.

Derick Brassard had been looking for a four-year deal at over $4 million per and likely won’t move off of that for now.

Have been told the Oilers could possibly do $3 million per, but would ideally be in around $2 to $2.5 million.

Other options could include Ryan Dzingel but he’s looking for something in the $4 to $5 million range. He might have to do a short-term deal if that is what he’s looking for. Some teams are wondering why the Columbus Blue Jackets didn’t offer him a contract.

Patrick Maroon doesn’t really fit because of Milan Lucic, and the Oilers don’t appear to have any interest at the moment.

Have been told that there have been no serious trade talks involving Milan Lucic. Teams aren’t interested. He has a cap hit of $6 million for four more seasons. Lucic was given a $3 million bonus on July 1st, confirmed by sources on both sides – Lucic and the Oilers – and not the rumored July 17th.

Letho on the suggestion that Puljujarvi would return to Europe this year.

“First off, I’m not sure that Jesse is going to go back to Europe. I don’t think Jesse himself ever, or I don’t think I did, ever told anyone that unless he’s traded he’s for sure going to be back in Europe.”

On Puljujarvi moving on from the Edmonton Oilers.

“What Jesse has been saying to (Oilers GM Holland) Kenny and everybody else, and what I’ve been saying, is we just don’t think it’s going to work out any more. He could definitely benefit from a fresh start. I think he deserves a fresh start. I think he has done everything that Edmonton coaches, management, they had a plan. He went down three times to the American League. Every time he played excellent and he was brought back up, right?

“It’s very unfortunate, I think that it’s been in the media a little bit, in Jesse’s mouth there has been put all kinds of words and in my mouth too. I never actually said anything. We’ve been having a really good dialogue with Kenny Holland about the trade possibility and obviously I’ve got so many teams calling me, asking what’s going on. Obviously nothing has happened yet.”