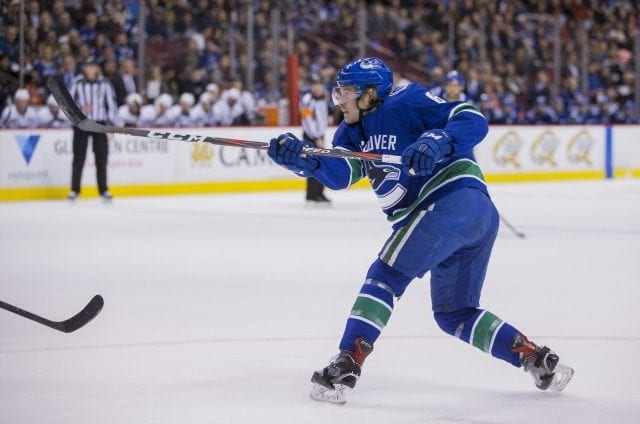 Jared Clinton of The Hockey News:  It’s all about term and money for the Vancouver Canucks and Brock Boeser. The intriguing part is the cap comparables that Boeser draws himself to — Johnny Gaudreau. Gaudreau, similar production, received a deal with an AAV of $7.5 million. That may be the range Vancouver looks for in a six, maybe seven-year pact.

Brock Boeser scores at a rate of 0.42 goals per game and 0.85 points per contest. Only 13 other players have done that in this timeframe. An expected range of dollars is anywhere from $6.5 to $8.25 million — it all depends on the term.

So about Mikko Rantanen‘s next deal…

Ryan S. Clark of The Athletic:  A little insight into the Mikko Rantanen negotiations yields this tidbit of a quote.

“But with the (Timo) Meier signing and obviously you saw the offer sheet with (Sebastian) Aho. So there’s some comparable numbers that are starting to come in,” Sakic said. “I think the more guys that get signed — and you see the comparable numbers — the easier it’s going to be at some point.”

Again, this is the starting point of the process and there are other variables and players to consider. On the other hand, Rantanen presents as an elite talent. This crop of RFA’s is plentiful. Unlike Toronto and Tampa Bay, Colorado has no cap concerns to afford Mikko Rantanen.

Say, Mike Liut pushes for a cap hit similar to the Vladimir Tarasenko deal (8 years, $7.5 million AAV). In present dollars, that could mean a $9.5-$10 million AAV for Rantanen. Expect a range between $8-$10 million.

Murat Ates of The Athletic:  Winnipeg possesses $20.4 million in cap space to sign the two mentioned above plus Pionk and Copp. Those two filed for salary arbitration.

All this totals $19 million of Winnipeg’s $20.4 million remaining cap space. That means some wiggle room exists. Mike Liut is also the agent of Patrik Laine. Would a $9 million AAV offer sheet cause Winnipeg to walk? It could with Laine but not with Connor (see Brock Boeser).

If Patrik Laine signs an offer sheet somewhere then things get interesting quick.

Bruins’ 2022 Offseason Trade Targets: Vancouver Canucks
Hockey Night in Canada: Oilers vs. Flames, Game 1
The last Battle of Alberta was in 1991. Here’s how Calgary is different — and how it remains the same
Damien Cox: Joel Quenneville could help the Leafs, but how long does disgrace last in hockey?
Today in Hockey History: May 15