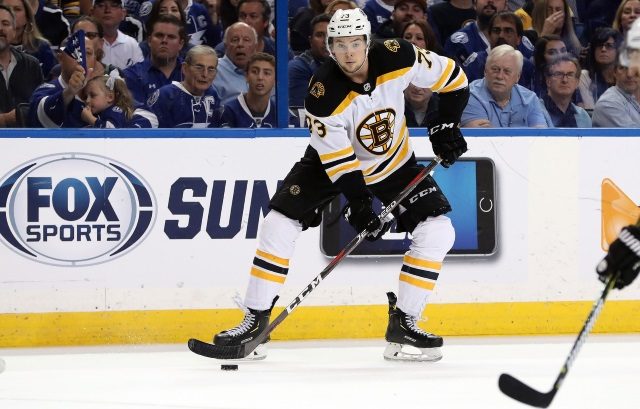 What Boston might do about their salary cap problem

Jared Clinton of The Hockey News:  Alas, the Boston Bruins possess about $8.1 million in cap space. The problem lies in the fact they have Charlie McAvoy and Brandon Carlo to sign. Both would easily command $10+ million combined in salary at a bare minimum. That puts the Bruins a couple million over the salary cap.

Trimming and burying fringe players would not work and even buying out David Backes hurts later. This is because next summer they have Jake DeBrusk, Charlie Coyle, and Torey Krug to worry about. Backes could still be traded along with Kevan Miller or even John Moore.

Larry Brooks of the New York Post:  Despite having nearly half the roster make at or under $1 million, New York is in a salary cap hell. This is because their bottom defensemen incur $15.625 million worth of space. Also, they signed Artemi Panarin, Kaapo Kakko, and traded for Jacob Trouba. No one wants to take Vlad Namestnikov’s $4 million AAV on.

Plus, there’s Chris Kreider and Pavel Buchnevich to worry about. Do they re-sign or trade either forward? Kreider carries a pesky 11-team NTC which makes him more difficult to deal.

All solutions point to buying out Kevin Shattenkirk and Brendan Smith no matter the pain that comes later. Maybe a team like Los Angeles comes calling but maybe they do not.

Should Edmonton bite on Pavel Buchnevich?

David Staples of the Edmonton Journal:  Again, with New York in salary cap limbo, the possibility of Pavel Buchnevich opens up. He would cost more than what Jimmy Vesey did.

However, the caliber of player jumps a good bit. Buchnevich probably puts up close to 50 points last year if injuries did not limit him to 64 games. As it was he scored 21 goals and 17 assists.

Ken Holland considering a trade like this is prudent. This may be a chance to package Jesse Puljujarvi somewhere. The question is does Holland trade the right player.

A quick thought on Brendan Perlini

John Dietz:  Stan Bowman admits Chicago can finally focus on negotiating with Perlini after the chaotic offseason so far. Fortunately, there is time left in the summer and action expects to pick up between the two camps in the next little bit.