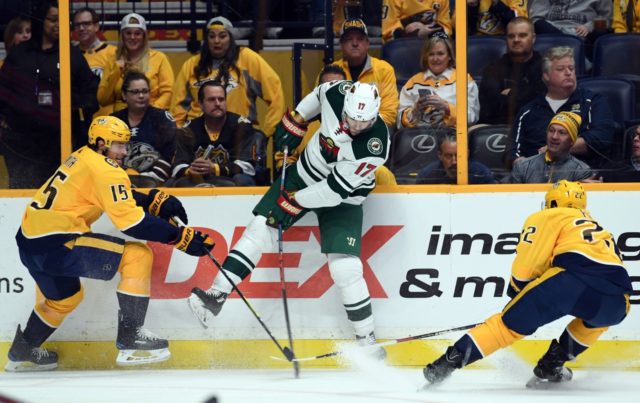 What deals could Kevin Fiala and Joel Eriksson Ek receive?

Michael Russo of The Athletic:  With most of Paul Fenton‘s offseason done, there are two more pieces of business left. Those would be re-signing Joel Eriksson Ek and Kevin Fiala. The question begs what do you sign these players for? Minnesota has about $7.6 million in cap space for the 2019-20 season.

Long-term deals look to not be prudent for either player. Keeping them motivated is vital here. Signing Eriksson Ek to a one or two-year deal would surprise few people. However, Fiala presents a more complicated case.

The expectation is Kevin Fiala signs a two or three-year deal with an AAV in the range of $3.1-$3.6 million AAV. So, if the forward inks a deal that is a bit more would not surprise.

Brett Cyrgalis of the New York Post: It has been alluded to for some time but the reality has come. Jacob Trouba signed a deal with an $8 million AAV for the next seven seasons. The New York Rangers are now over the salary cap by a bit over $900,000.

John Davidson has called this “the build” and not the rebuild. Unfortunately, the cost of doing business means Jeff Gorton faces tough decisions. The first is what to do with Chris Kreider. Is there a way Gorton can keep him or will the general manager have to trade the forward?

Other options include buying out Kevin Shattenkirk and Brendan Smith. Also, burying Smith in the minors is a viable option. Remember, Jeff Gorton ponders how he will sign his three remaining restricted free agents. Does he let one of them walk away? That is a possibility as well.

There remains a chance that Vladimir Namestnikov could be traded but Gorton will only get a small return. On the other hand, New York has a group of young players who show a good deal of promise. That makes players like Chris Kreider potentially expendable, among others. This is all thanks to Jacob Trouba – for better or for worse.

Eight lessons from 32 Stanley Cup playoff games
Scoring is up in the Stanley Cup playoffs — and that’s great for hockey
Hockey Night in Canada: Lightning vs. Maple Leafs, Game 7
Gaudreau scores on penalty shot as Flames down Stars to even series
Wild’s 3 Most Disappointing Players of the 2022 Playoffs