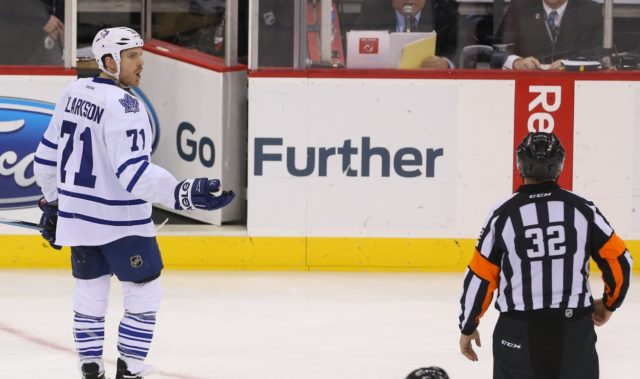 The Toronto Maple Leafs have traded goaltender Garret Sparks to the Vegas Golden Knights for a 2020 4th round pick and David Clarkson.

Clarkson carries a $5.25 million salary cap with a base salary of $1 million.

James Mirtle: “Clarkson only has $1-million in base salary remaining. Leafs are going to be into LTIR with Horton regardless so they acquire a fourth-round pick by getting deeper into it. And unload Sparks.”

David Alter: “The NHL has specific rules about off-season cap overages. The Clarkson deal puts them very close to $89.65 million when you factor that many of their deals have yet to be registered with the League (example, Agostino, Wilson,etc).”

Kevin McGran: “#leafs have tons of cap room suddenly … enough for Marner and maybe even … just spitballing from a Euro vacation so don’t come at me … Jake Gardiner”

Dave McCarthy: “My guess – GUESS – would be that this David Clarkson / Garret Sparks trade with #GoldenKnights is an indication Mitch Marner won’t sign until the day after cap compliance is required.”

SinBin.Vegas: “The difference between the Leafs and Golden Knights in regards to Clarkson is that TOR was already going to use LTIR (because of Nathan Horton). By moving him, VGK now will not. There are a few minimal drawbacks to using it that VGK now avoids. Didn’t matter for TOR.”

SinBin.Vegas: “To my knowledge, the benefit of this is twofold: 1) VGK gets slightly more wiggle room in-season against the cap 2) Performance bonuses can be pushed to 2020-21 which would allow them to potentially give more to Engelland and allow Glass a spot on the roster.”

Adam Gretz: “I know the Leafs are just going to LTIR Clarkson, but if you’re going to help a team out of its salary cap mess *and* give up a player in return you should be holding out for more than a fourth-round pick.”

Ian Tulloch: “I thought Clarkson’s $5.25M would’ve cost more to offload than a 4th round pick, but I guess that was the market. It’s worth noting he’ll be on LTIR for the remainder of the contract (it won’t affect Toronto’s salary cap)”

Ian Tulloch: “After discussing the David Clarkson trade (2.0) with a few smart people, the Leafs are essentially “buying” a draft pick. Vegas didn’t want to pay 20% of Clarkson’s salary (insurance only covers 80%), Toronto ships out Sparks & add a draft pick without it affecting their cap.”

Scott Wheeler: “Sparks was a breath of fresh air in the Leafs/Marlies rooms. Open, vulnerable, emotional, honest. Sometimes too much so. His Calder Cup run was crazy-impressive. Wouldn’t be surprised if he turned it around after an ugly year.”

After trading David Clarkson to Toronto, and signing D Deryk Engelland for $700k, we now show the Vegas #GoldenKnights with $1M in projected cap space and a roster of 22 (14F 6D 2G)