Lehigh Valley, Pa. — For the third consecutive year, the Lehigh Valley Phantoms, proud AHL affiliate of the Philadelphia Flyers, will hit the track as the primary sponsor of NASCAR Series rides during this weekend’s festivities at Pocono Raceway in Long Pond, Pennsylvania.

The race weekend at the “Tricky Triangle” will begin on Friday, July 26, and culminate with the main event  — the Monster Energy NASCAR Cup Series Gander RV 400 — on Sunday, July 28, in which the Phantoms will sponsor the No. 27 Chevrolet Camaro ZL1 driven by Reed Sorenson.  A day prior, on July 27, during the NASCAR Gander Outdoors Truck Series Gander RV 150, sixth-year professional Josh Reaume will be behind the wheel of the Lehigh Valley Phantoms No. 33 Chevrolet Silverado.

Thanks to a continued partnership with Pat Cole and Elevated Performance, the Phantoms were able to connect with veteran driver Reed Sorenson of Premium Motorsports to help wheel the Phantoms No. 27 on Sunday. Sorenson is a 33-year-old native of Peachtree City, Georgia, and is in his 15th year as a professional driver. He has been behind the wheel for over 315 NASCAR Series races and has picked up several career wins in the NASCAR Xfinity Series.

“I’m super thankful for the partnership with Jim and Rob and the Lehigh Valley Phantoms family,” said Pat Cole of Elevated Performance. “True character and integrity make up the values of the Brooks family vision and it’s embedded and can be felt throughout the Phantoms family network. On behalf of Elevated Performance and it’s partners, we truly appreciate and are very thrilled for the unveiling for this race weekend in Pocono. The Phantoms fans and all of the NASCAR community are in for a treat with our Reaume brothers 33 truck and Premium Motorsports 27 car this weekend which both carry the Phantoms and it’s partners paint scheme.”

Reaume, who piloted the Phantoms No. 33 truck to a 19th-place finish during the 2018 race at Pocono, is a 28-year-old California native that was raised in Africa and with his fast speed on the track has earned him the nickname “The African Squirrel”.  As an owner of Reaume Brothers Racing, Josh and the Phantoms have forged a solid partnership over the past two years, which has expanded past the racetrack and into the ice rink including an appearance at the Phantoms Racing Night at PPL Center on January 25, 2019.

“Last year was my first trip to the tricky triangle and I’m excited to get on the track and improve on our results from last year,” Reaume said.  “Having had an opportunity to meet a lot of Phantoms fans last season at PPL Center, I’m proud to represent them again.  Honestly, this has been the most anticipated race of the season for me.”

The tandem of rides will feature the Phantoms iconic Orange and Black color scheme with all black bodies and fluorescent orange accents on both the numbers and Phantoms logos.

In addition to the Phantoms primary sponsorship, both Phantoms rides will feature several other local partners during the weekend.  Coming along for the ride will be Service Electric Cable TV, Yocco’s Hot Dogs, Spectra, Lehigh Valley Grand Prix, Molasses Creek Horse Farm, 99 Bottles and PPL Center. The car and truck will also proudly feature the logo of the Philadelphia Flyers. 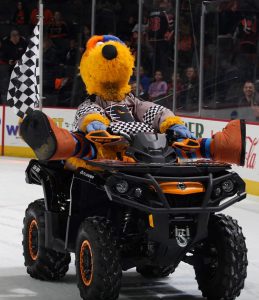 “Over the past two years, we have had the opportunity to blend two amazing fan bases from two exciting sports together,” said Jim Brooks, Co-Owner of the Phantoms.  “Both NASCAR and the sport of hockey are fun, exciting and fast, so it’s easy to understand why members of Phan Nation can so easily relate to racing fans when cheering on their favorites.  We wish the best of luck to Josh and Reed, as well as their respective teams, this weekend.”

“Not only are we pleased to be helping out two of the drivers in this weekend’s races, but we are thrilled to bring along some of our local partners too,” said Rob Brooks, Co-Owner of the Phantoms.  “Pocono Raceway is a tremendous asset to our community and to bring all of these local brands together is truly something special.”

During this past season Phantoms forward Greg Carey won the AHL’s Hardest Shot Competition at the 2019 AHL All-Star Classic with a 100.4 mile-per-hour shot.  While that is fast, Carey will need to do some work to keep up with the blazing speeds of the Phantoms NASCAR rides that reach speeds of near 200 miles per hour!

The Phantoms recently announced their 2019-20 regular-season schedule and just 10 weeks after the Phantoms cars hit the track at Pocono Raceway, the players will hit the ice at PPL Center for Opening Night on Saturday, October 5 when the team takes on the Providence Bruins. Season tickets to the Phantoms, offering a wide range of benefits, as well as 21-Game and 13-Game plans and group ticket options are all available now by calling 610-224-GOAL (4625) or visiting phantomshockey.com 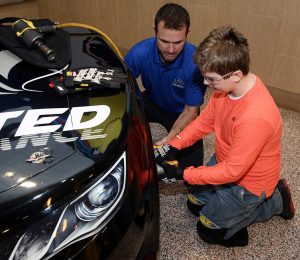 Once again the Phantoms will have a fun and exciting theme and promotions schedule for the upcoming season, which will be released soon. After the tremendous success last season, we are excited to announce the return of our Racing Night promotion for the upcoming season on the weekend of January 17 and 18, 2020. Last year’s Racing Night featured appearances by both of 2018’s NASCAR Series drivers, pit crew demonstrations by Elevated Performance and special racing-themed-warm-up jerseys.

Phantoms Fans and Race Fans alike that want to watch the two events this weekend can find both on national television on the following dates, times and stations: