Despite only being around for 24 years, the Anaheim Ducks sure do like taking walks down memory lane.

After he previously spent parts of six seasons with the team, the then-Mighty Ducks brought back Teemu Selanne for the 2005-06 season (and the eight that followed), four years after shipping him to the San Jose Sharks at the 2001 trade deadline.

Ducks head coach Randy Carlyle, too, is a retread. Having coached in Anaheim for the first seven seasons after the 2004-05 lockout (a tenure which included winning the 2007 Stanley Cup), Carlyle was rehired for 2016-17, guiding the Ducks to the Western Conference Final.

Unsurprisingly, the Anaheim Ducks’ logo history bears much of the same commitment to nostalgia. What’s that you say? You prefer to think of it as a distinct lack of imagination? Well that’s not very nice now, is it? I mean, how can you say a team that ripped off the name of a children’s movie lacks imagination? Especially when the team was founded and owned (until 2005) by Disney, a company that tries to sell “platinum” and “remastered” editions of films that have been out for decades? Stop talking nonsense!

The Ducks’ inaugural logo is one of the most enduring images of the National Hockey League in the 1990s. The arrival of brand-new teams in brand-new markets, not to mention the…creative styling and colour trends of the time, broke the mould of the NHL uniform, resulting in an explosion of creativity. And, in the case of the Mighty Ducks (of Anaheim), things worked out rather well.

Only when this glorious logo was taken away, did hockey fans truly come to appreciate its merits. (Chris Creamer’s SportsLogos.Net)

Their very first primary logo depicts a duck-shaped goalie mask…on top of a cross of two hockey sticks…on top of a black circle…on top of an upside down triangle. Somewhat complicated, to be sure. One can also criticise the attempt for being a little cartoonish.

But a good logo takes time to work its way into the heart. Penguins aren’t exactly known for their aggression, but Pittsburgh’s Skating Penguin logo is now one of the NHL’s most iconic crests.

The Ducks’ first attempt at a logo has aged well, too. The darkness behind the mask, not to mention the mask’s angry expression, suggests some sort of vengeful, supernatural power is at play. And again, it is one of the most iconic logos of the ‘90s, an aesthetically unhinged decade in which it was difficult to stand out. I was ecstatic when the Ducks brought it back as a shoulder patch in 2010, and as a primary logo in 2015. But more on that later.

Named after the Ducks’ mascot, this…interesting primary logo was featured on Anaheim’s alternate jersey introduced for the 1995-96 season, as part of the NHL’s “Fashionable Authentic” uniform programme. 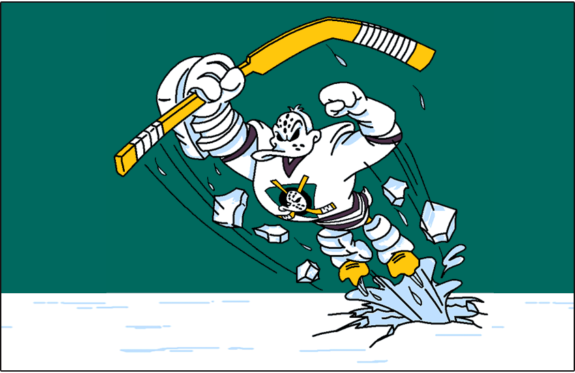 Just how many people had to sign off on this monstrosity for it to make it onto the chests of professional hockey players? (Chris Creamer’s SportsLogos.Net)

…yeah. Needless to say, neither this logo, nor the abomination of a jersey it adorned, returned for a second season.

While I respect the attempt at creativity and the enthusiastic embrace of newly available printing techniques, this Ducks’ logo, along with those of the Los Angeles Kings and St. Louis Blues from the same year, were absolutely atrocious.

At least the Kings and Blues had decades of history behind them, allowing them some leeway with fans and media to make such a mistake. In contrast, Anaheim had played only two seasons (a season and a half, if you factor in the partial lockout in 1994-95) when they debuted this beauty. The Wild Wing kit might have gotten the team publicity, but I can’t see how it wouldn’t have damaged the credibility of the fledgling Mighty Ducks in the crowded Los Angeles sporting scene.

In addition, neither the Kings nor the Blues had run into previous problems with their primary crests. The Mighty Ducks, on the other hand, had a somewhat cartoonish logo and were named after a Disney movie (albeit a live-action one). A childish drawing of an already caricatured mascot for a sports team whose name does not exactly evoke emotion? The very idea of using this logo for a professional sports team was as ill-conceived as the crest itself was ill-designed.

After the Wild Wing debacle of 1995-96, the Mighty Ducks went a little more conservative with their new secondary logo, which was used as the shoulder patch for their home and away jerseys.

You know what? I admit it. If this thing came after me, I would be absolutely terrified. (Chris Creamer’s SportsLogos.Net)

The circular border bears the team name, while the goalie mask is squared up to the viewer, instead of staring slightly off-centre, as in the primary crest. However, I’m not happy with the lack of continuity between the Mighty Duck primary logo and this shoulder patch. The quantity and patterning of the goalie mask’s holes is different. Plus, the disembodied duck head appears to have a lower lip or bill (do ducks even have lips?), seemingly indicating that, yes, this is indeed an actual duck, rather than simply a duck-shaped goalie mask with a mysterious presence behind it. So, like, is the duck horribly disfigured? It is the spawn of Jason Voorhees and a mallard? I have so many questions.

In 2003, the Mighty Ducks made a rather timid effort to re-enter the world of the alternate jersey, debuting a black and eggplant kit with a script-based primary crest. The lack of imagination that went into the crest matches the drab, colourless and wholly uninspired appearance of the jerseys they adorned. 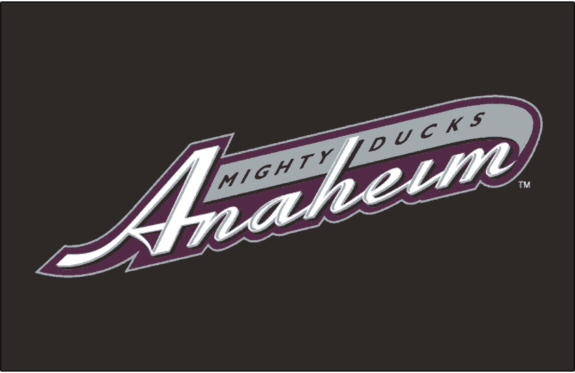 I love how a team name containing “Mighty” is written in the smallest possible font. (Chris Creamer’s SportsLogos.Net) 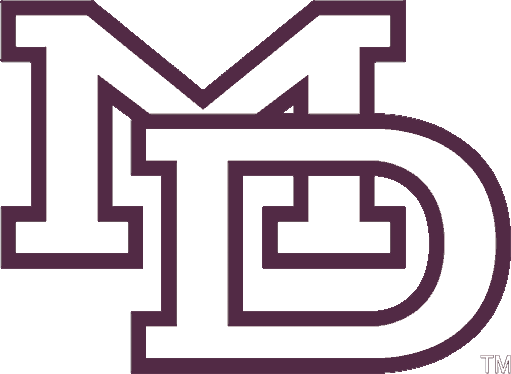 Isn’t this the abbreviation for Maryland? (Chris Creamer’s SportsLogos.Net)

There’s really nothing here of substance for either of these, so I shan’t go into them further. The alternate kit, logo included, disappeared after the 2005-06 season. Just a few years later, many people would fall madly in love with script logos (see: Wild, Minnesota). These people are wrong. Thankfully for the Mighty Ducks, they got out early. Sort of.

For 2006-07, the Mighty Ducks become the Ducks and completely redesigned their uniforms to complete the rebrand. Gone was the jade and eggplant colour scheme, replaced by a harder, darker, meaner palette emphasising black, trimmed with gold and orange. The logo, too, changed, from the Mighty Duck to a stylised “Ducks” script. The “D” in the logo was particularly clever, resembling a duck’s foot – and also a duck in flight. I am no fan of script crests, but the Ducks at least put some effort into this one.

Is it a duck’s foot? Is it a duck in flight? Who knows! That’s the fun!! (Chris Creamer’s SportsLogos.Net)

The rebrand came just in time, as the Ducks won the 2007 Stanley Cup in their new duds. Not a bad debut for the Duck Foot logo.

The 2010-11 season saw the Ducks introduce a bold new third jersey, featuring the aforementioned “D” isolated and utilised as the kit’s primary crest.

This Anaheim Ducks logo looks rather good; certainly better than the script version. Anaheim must have thought so too as, in 2014, they made the Duck Foot jersey their full-time home uniform, introducing a white counterpart for use on the road.

The Duck foot is a fine logo, to be sure. However, there’s just no getting around the fact it’s…well, a little plain. I’m sorry, it just is. It isn’t fearsome, it isn’t mysterious; it doesn’t really evoke anything at all. I really feel it would be better utilised as a secondary emblem…

…especially since the team chose to bring back the Mighty Duck for use in the shoulder patch of these jerseys.

Shout-out to the designers for staying on-brand and using the Ducks’ excellent number font in the oval-shaped border. (Chris Creamer’s SportsLogos.Net)

The oval pattern surrounding the appropriately tinted Mighty Duck logo features “Anaheim Ducks” in the team’s lovely, flourish-laden number font, which would make it a good choice as a primary logo. But you know what would look even better?

Yes, you’re reading this right: an NHL team actually listened to its fans. Praise be!

The Ducks introduced a phenomenal orange alternate kit in 2015-16. Front and centre in this spectacular effort is the Mighty Duck logo, free of textual accoutrement and coloured to suit the team’s updated palette. 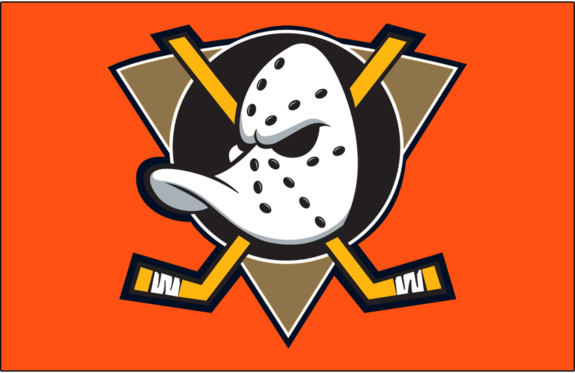 If anything, I like this logo better on the orange backdrop instead of surrounded by jade and eggplant. (Chris Creamer’s SportsLogos.Net)

One of the easiest criticisms to hurl at the original iteration of this logo was its cartoonishness. However, hardened by the team’s updated colour scheme, it looks properly aggressive. It also helps that the gold-coloured hockey sticks now match the colour palette, as they stuck out rather prominently on the original jerseys.

I should also note that the Duck Foot logo is used as a shoulder patch on these uniforms. Nice. The Ducks got this one bang-on. Here’s hoping this kit makes a return to active duty once Adidas figures out how to hockey. 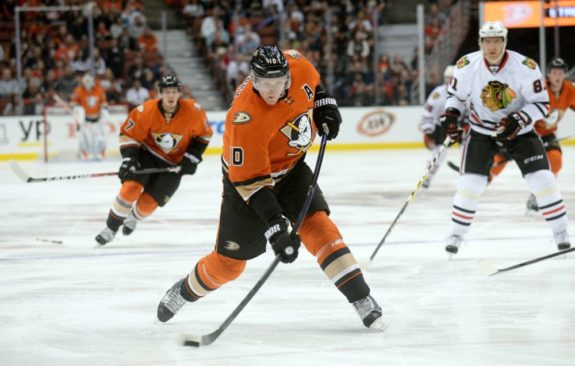 Corey Perry wearing one of the best jerseys in the NHL today. Well, when I say today, I mean next year, when Adidas gets its act together. (Gary A. Vasquez / USA TODAY Sports)

So, there you have it. The Anaheim Ducks, like so many NHL teams before them, inexplicably did away with something most fans liked. But unlike most of their counterparts, they had the sense to make things right again.

It is a gradual process, to be sure – the orange kits with the Mighty Duck logo are still just alternates. But can a full-time uniform set with this logo arrangement really be far behind?

(All logo images are thanks to Chris Creamer’s SportsLogos.Net)