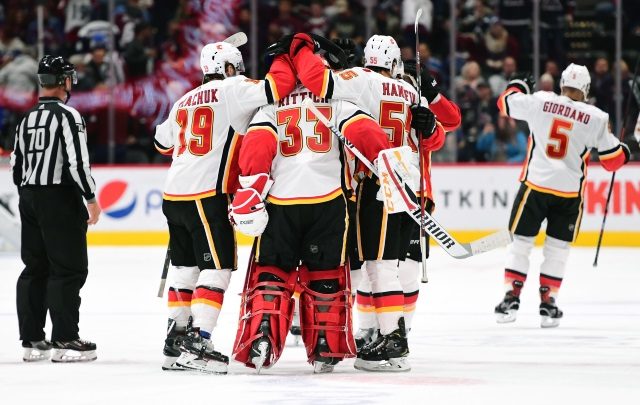 Murphy signs in the KHL

Igor Eronko: Former 12th overall pick in the 2011 draft by the Carolina Hurricanes – Ryan Murphy – has signed a one-year deal with Neftekhimik of the KHL.

Calgary Flames: The Flames signed goaltender David Rittich to a two-year contract with an AAV of $2.75 million.

Flames running out of cap space but they have some ideas

Ryan Pike: The Calgary Flames now have a second buyout window. It opens on Tuesday and closes at 3 PM MT on Thursday.

Kristen Anderson of the Calgary Sun: The Flames will run with a 1A and 1B tandem this season with David Rittich and Cam Talbot.

The Flames are now left with two restricted free agents – Matthew Tkachuk and Andrew Mangiapane and only about $4.673 million in salary cap space. Tkachuk could possible make double the cap space they have

“We just have to keep looking at each of these things and knock them off the list,” Treliving said. “We’ve talked about Matthew, really, throughout the summer and continue to work away at that. We’ll continue to work at our roster and get the guys we need to get signed, signed, and make sure we have enough shackles in the drawer to get everybody looked after … we think we have some ideas in place and we’ll see how this plays itself out over the next few weeks.”

NHL Rumors: Will the Buffalo Sabres be tempted leading up to the deadline?
Senators Need to Build Momentum in 2nd Half & Not Be Big Sellers
Debating big questions on the Bruins: Team MVP, toughest challenger, trades to make
Canucks Acquire Beauvillier & Raty From Islanders For Horvat
Maple Leafs’ Matthews out at least 3 weeks, to miss all-star game with knee sprain