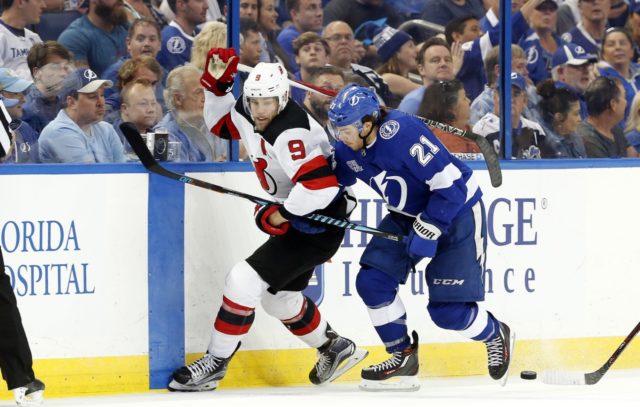 Kreider’s name still out there

Larry Brooks: A couple of sources have said that New York Rangers forward Chris Kreider‘s “names is out there everywhere.”

Hynes meets up with Hall in Toronto

Mike Morreale: New Jersey Devils assistant GM Tom Fitzgerald updating the Taylor Hall situation: “I know John Hynes flew up (Monday) and had a great meeting with Taylor in Toronto. So, yeah, things seem to be all well there.”

All quiet on the Canucks front

Rick Dhaliwal: It is very quiet between the Vancouver Canucks and RFA Brock Boeser. It is a slow process, just like it is for all of the other RFAs.

There is also nothing new to report on the Loui Eriksson situation.

Isles were in on Gusev

Arthur Staple: From understanding the New York Islanders were in the mix for Nikita Gusev before he was traded the New Jersey Devils, but they didn’t really like Gusev’s contract asking price.

Point should be signed before training camp

“I don’t have a precise timeline,” BriseBois said. “I feel very optimistic, but I don’t have any new information with regards to the Brayden Point contract.”

BriseBois adds that the deal is a little more complicated and RFA deadlines are basically around training camps.

“Again, I don’t want to get too much into details of the Brayden Point contract,” BriseBois said. “But what I will say is there are all of these players that signed shorter deals coming out of their entry-level contracts who all ended up signing long-term deals and were able to stick with our organization, whether it’s Tyler Johnson or Ondrej Palat or Alex Killorn.