Wade Megan, who was third in goals for the Grand Rapids Griffins and appeared in 11 games with the Detroit Red Wings last season, has retired.

Megan, who played professionally for seven seasons, plans to focus on running a hockey camp in his native Canton, New York, according to a story from NNY.360.com.

Last season, the 29-year-old center appeared in 48 games with the Grifins and was fifth on the team in points (19-18-37) and third in goals. He also had seven power play goals, second on the team, and scored twice in five playoff games last season.

Because of early-season injuries – most notably to Thomas Vanek – Megan spent extended time with the Red Wings and picked up an assist in 11 games. 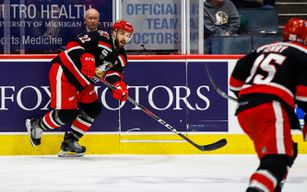 Wade Megan back (again) with Griffins and ready to adjust (again)

Veteran researched his options before signing with Detroit, and it has paid off with more NHL time than expected.

“It’s just one of those things where I worked incredibly hard and no one can ever take that away from me,” Megan told NNY360.com. “I was able to get up there and play some games in the NHL and have an incredible experience along the way and meet a lot of great people, a lot of great coaches. Some of my best friends I’ve met through the game of hockey.”

Overall, Megan appeared in 15 NHL games, the other four coming with the St. Louis Blues, with two points. He scored his lone NHL goal in 2017.

Before coming to the Griffins, Megan played two seasons with the Chicago Wolves. He also played for Portland and three seasons with San Antonio.

His best year came with Chicago in 2016-17 when he led the AHL with 33 goals and was fourth overall in points with 66.