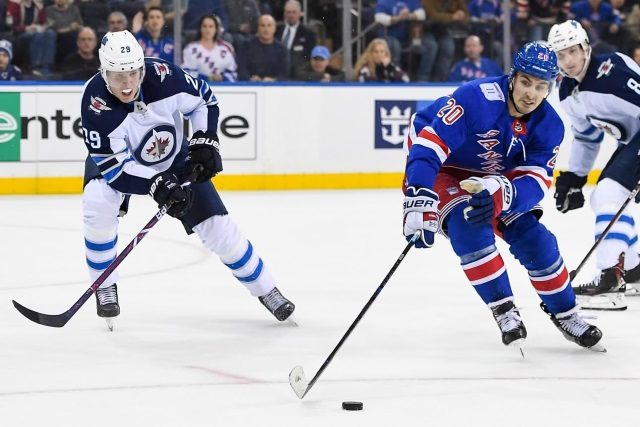 Who will blink first?

Mike McIntyre of the Winnipeg Free Press: Agents are saying to not expect the group of top RFAs to sign soon. RFAs and GMs are not wanting to ‘blink’ first.

“It’s all about the top young players figuring out and defining what the market place is and will be moving forward. It’s also about the leverage that those young players have at least before training camp and as the season begins,” one agent told me on Wednesday.

The Winnipeg Jets need to re-sign both Patrik Laine and Kyle Connor but only have about $14.5 million in salary cap space. Will that be enough to get both players signed or will they need to make some additional moves?

“I totally expect him to be in camp,” Rangers president John Davidson said Thursday. “It’s hard to make promises. Things change, but Chris is a valued member of the New York Rangers and I look forward to him having a great camp and a great run with us.

“He’s got one year left, and that should be a whole lot of importance to him to come in and have a great camp and a great year, and we’ll just see where it all goes.”

After signing Artemi Panarin and Jacob Trouba to big contracts, the Rangers were in a bit of a cap crunch. Kevin Shattenkirk was bought out.

Kreider has a year left at $4.625 million and it’s not known if they want to offer him a contract extension or not.

“We’ll deal with that,” general manager Jeff Gorton said. “We’ll continue to talk to Chris and see what’s next for him, but we’ll start with training camp, get him going on the right path. Hopefully he’s helping us win games, and then we’ll figure it out.”

3 Lightning Who Must Step Up in Game 7 vs. Maple Leafs
Five things to know about the National Hockey League playoffs
Point pots OT winner as Bolts beat Maple Leafs to force series finale in Toronto
Domi, Raanta help Hurricanes close out Bruins 3-2 in Game 7
Admirals enjoy win before preparing for clash with Wolves