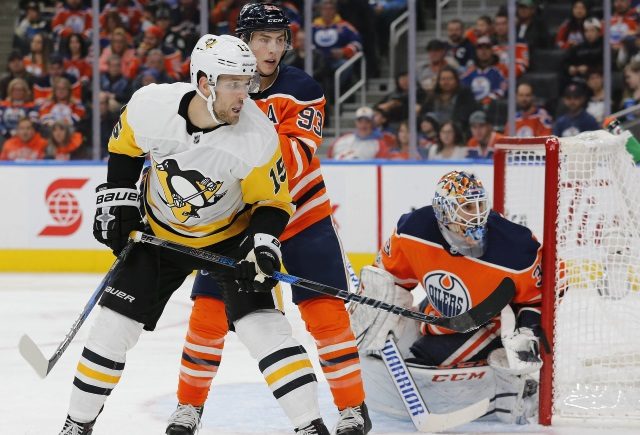 Do the Oilers look to free agency to bring in a potential No. 3 center?

Allan Mitchell of The Athletic: The Edmonton Oilers are not deep down the middle. One free agent option that could be a good fit for the Oilers is Riley Sheahan.

Sheahan is over 50 percent on the draw and can kill penalties. He could slot in nicely as their No. 3 center.

The Oilers brought in Gaetan Haas this offseason as an option at center – Cooper Marody is another. Both don’t have not having much NHL experience if at all in Haas’ case.

Haas and Marody bring more offense but likely wouldn’t make the team if they signed Sheahan.

Kreider will likely be moved at some point

Rick Carpiniello of The Athletic: had an off-the-record talk with New York Rangers forward Chris Kreider.

It’s more likely that Kreider gets traded this season before he’s able to walk into free agency. He’s trying not to focus on all the ‘what-ifs’ that might happen this season.

Kreider knows they have moved out many pending UFAs in the past couple years and that the Rangers might be interesting in going as high as seven years and $7 million plus on a new deal. If the Rangers and Kreider are both willing to do something smaller then may be they could work something out.

More than likely that he’ll be moved.

Would someone offer sheet Rangers RFAs DeAngelo or Lemieux?

Rick Carpiniello of The Athletic: It’s not a big deal that Anthony DeAngelo and Brendan Lemieux haven’t signed yet with the New York Rangers. They will likely accept their qualifying as they have little leverage.

DeAngelo and Lemieux could sign an offer sheet with someone. thinks the Rangers would take the draft pick compensation for them – likely a third round pick. Those teams may need to keep in mind that in 2021 the Rangers will have over $18 million coming off the books.

Lightning Dynasty Is Secure Regardless of Stanley Cup Results
When Nazem Kadri hoisted the Stanley Cup, he lifted a whole community along with it
Have your say: Which NHL coaching change is the best fit?
NHL Rumors: Vancouver Canucks, New York Rangers, and the Boston Bruins
Have your say: Should Nazem Kadri’s controversial overtime winner have counted?