Welcome to another edition of Philadelphia Flyers News & Rumors. The Flyers traded for Nashville Predators defenseman Ryan Ellis over the weekend, and the team revealed what players they protected and exposed for the expansion draft on Wednesday. Aside from forwards Claude Giroux and Kevin Hayes, who have no-movement clauses in their contracts, the protected list divulged what age group of players the organization would prefer to serve as the foundation to build the team around. The protected list also included an unexpected player, who many experts projected the Flyers would expose.

Ellis was traded to the Flyers in what became a three-team trade that included the Predators and Vegas Golden Knights on July 17. The Predators received Flyers defenseman Philippe Myers and forward Nolan Patrick, and the Golden Knights acquired Patrick in exchange for forward Cody Glass. Ellis is a right-shot defenseman who was an alternate captain with the Predators and has previous leadership experience with the Windsor Spitfires of the Ontario Hockey League (OHL). His prior background as a leader and previous years playing in the NHL can help defenseman Ivan Provorov rebound from last season if the duo ends up paired together.

According to an article by Charlie O’Connor of The Athletic, general manager Chuck Fletcher said the following about Ellis, “He is one of the best passers in the game on the blue line. He’s great in transition.” (from ‘Breaking down the Ryan Ellis trade: Flyers fill biggest roster need in offseason-defining move,’ The Athletic, 07/17/2021) 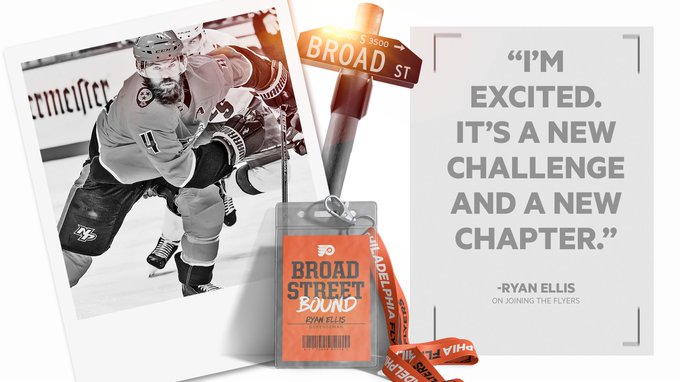 Patrick gets a new start with a contending team in the Golden Knights, as he did not live up to his potential with the Flyers after being selected with the second overall pick in the 2017 NHL Entry Draft. The forward was inactive for the entire 2019-20 season with a migraine disorder and struggled to rebound during the shortened 2020-21 season after not playing in an NHL game in over a year. The acquisition of Myers allows for the Predators to get younger by trading an experienced defenseman in Ellis for the 24-year-old blueliner. He may end up paired with Matt Benning or Mark Borowiecki on the Predators’ bottom defensive pairing.

The Flyers announced on July 18 the list of players they’re protecting from being selected by the Seattle Kraken in the expansion draft on July 21. In addition to Giroux and Hayes, Sean Couturier, Travis Konecny, Scott Laughton, Oskar Lindblom and Nicolas Aube-Kubel are the other forwards they protected. The other players are Ellis, Provorov, Travis Sanheim and goaltender Carter Hart. The notable exposed players include forwards Jakub Voracek and James van Riemsdyk, along with defensemen Shayne Gostisbehere, Robert Hagg and Justin Braun. 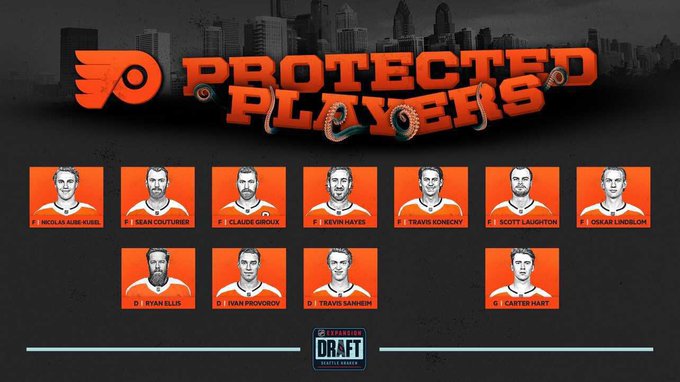 The choice to protect the younger Aube-Kubel in favor of veterans such as Voracek, van Riemsdyk and Gostisbehere signifies that Fletcher is taking a chance on younger players currently on the team instead of some of the veterans. The general manager is looking for the opportunity to gradually build around another set of players on the roster that have the opportunity to comprise the future of the franchise. The 25-year-old forward will enter the last year of his contract, where he will make $1.075 million before becoming a restricted free agent (RFA).

Aube-Kubel regressed in 2020-21 after a strong year during the 2019-20 season in which he was essential to the Flyers defensive forwards against the opponents forecheck and Fletcher is counting on him to rebound in 2021-22 from the disappointing season he had. The forward has an opportunity to learn from his mistakes this year in order to be a more productive player in the future. If he does not play well next year, he will concede ice time to another young player looking to make the roster.

The Flyers hired Darryl Williams as an assistant coach on July 19 and he will join fellow assistant coaches Mike Yeo, Michel Therrien, Adam Patterson and Kim Dillabaugh on head coach Alain Vigneault’s staff. Williams worked previously with Vigneault when the latter was the head coach of the Vancouver Canucks and the New York Rangers. The duo worked together with the Canucks from 2008-09 until 2013-14 and with the Rangers beginning in 2014-15 until 2017-18. He played briefly for the Los Angeles Kings in 1992-93 and since January 2019 served as an assistant coach of the Newfoundland Growlers of the ECHL, formerly known as the East Coast Hockey League.

“I’m honored to join the Philadelphia Flyers organization. I can’t wait to get started with such a great staff and an exciting group of players.” https://t.co/EfXjKXtLCQ

Adding Ellis gives the franchise an opportunity to have a new face with leadership inside the Flyers’ locker room. He will be a welcomed addition to the defensive unit, particularly Provorov, if the two defensemen are paired together next season. If the Kraken select Voracek, van Riemsdyk or Gostisbehere, the Flyers will receive some relief in their cap space that they can offer toward an unrestricted free agent (UFA). They could also use it to re-sign a player who is currently a restricted free agent (Hart) or one who will be in the future (forward Joel Farabee). So the Flyers will have new faces on the roster in October who’ll be looking to help the returning players get back to the postseason in 2021-22.

Matt covers the Philadelphia Flyers and the Pittsburgh Penguins for The Hockey Writers. Matt’s priority is to contribute exceptional content about the Flyers and Penguins for THW and its readers. Matt writes for The Globe newspaper at Salt Lake Community College. To see more of Matt’s writing, visit his portfolio. For interview requests, follow Matt on Twitter that appears at the end of articles for THW.